Symbols of geometric tolerance and surface roughness and their meanings

Any part is composed of three elements: point, line and surface. After machining, the actual elements of the part often have errors compared with the ideal elements, including shape error and position error. In industrial design, mechanical parts need to be tested according to the form and location tolerance standard. When designing the RF connector, the corresponding tolerance shall be marked on the drawing according to the specified standard symbol. When machining, due to different machining methods and workpiece materials, the machined surface will have small spacing and small peak valley unevenness which is surface roughness. Form and position errors and surface roughness will affect the performance of mechanical parts. In this chapter, we will introduce the symbols and significance of geometric tolerance and surface roughness. A thorough understanding of the theory is an important prerequisite for design and practical production applications.

Form tolerance：It is the basic geometric tolerance that determines the shape of the workpiece. It’s an independent feature, can be determined independently without a datum. 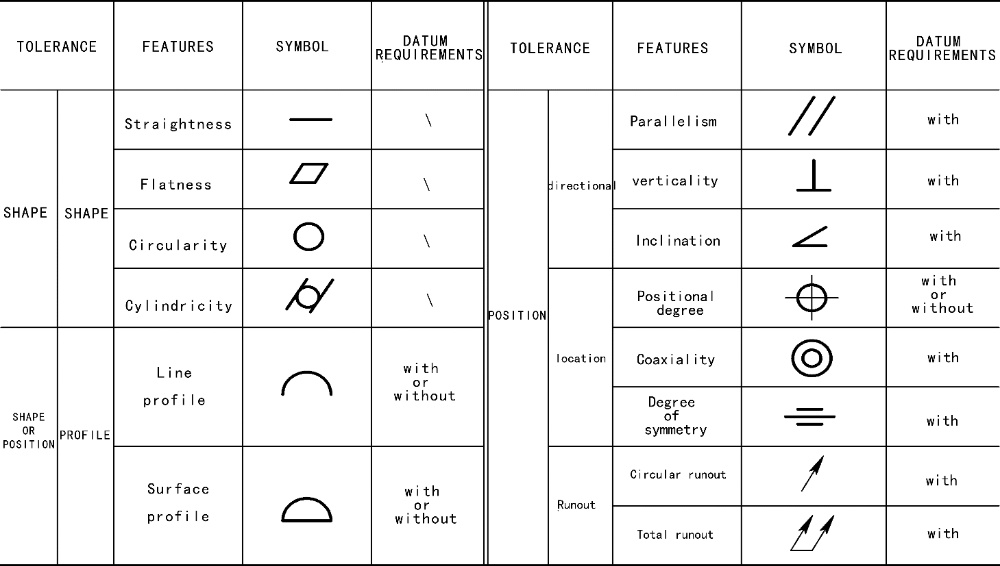 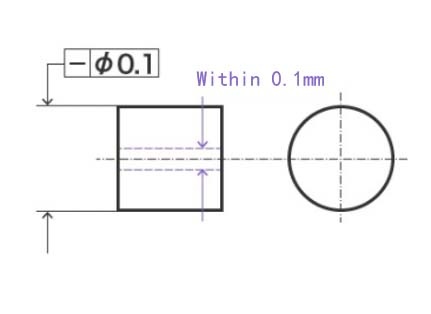 The content in the shape control box above indicates that the axis of the cylinder must be located within a cylinder with a diameter of 0.1 mm.

Flatness refers to the state that all elements of a surface are on a plane.

Flatness control: it refers to the geometric tolerance that limits the allowable unevenness error of a surface. 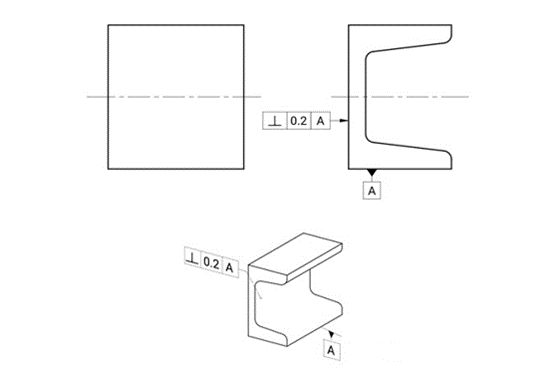 Verticality indicates the degree of change of line element, surface, center plane, tangent plane or axis in the direction of 90 ° (vertical) relative to the datum.

Coaxiality specifies the coaxiality of the axis of two cylindrical surfaces. It is a positional tolerance and requires a reference datum.

The positional degree indicates the position of the dimension feature in the datum system and the change degree of the relative real position. 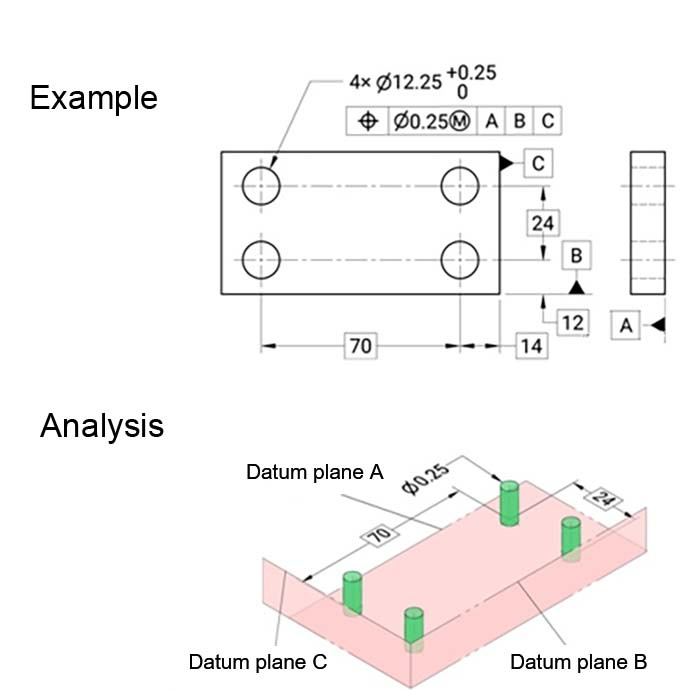 Circular runout describes the runout of any circular part when the workpiece rotates.

The shape control frame in the above figure shows that if it rotates 1 circle around the datum axis in a straight line, the radial runout of the cylindrical surface pointed by the arrow of the marking line on any measuring plane perpendicular to the datum axis line shall not exceed 0.03 mm. 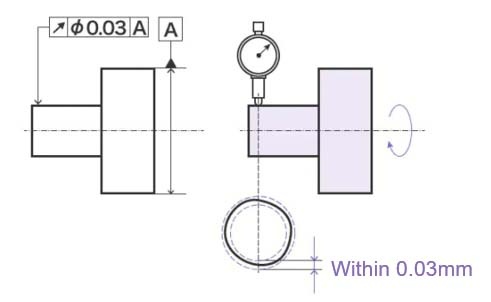 Total runout describes the runout of the entire rotating surface during rotation. 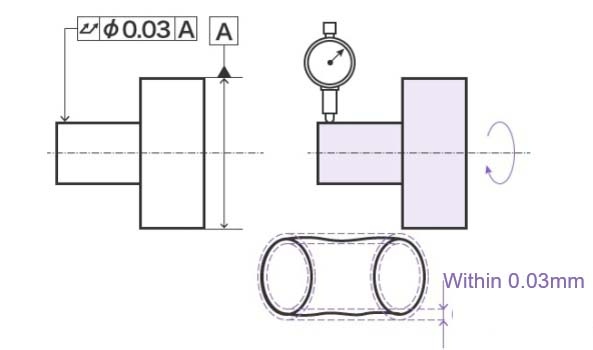 The surface roughness code specified in the national standard consists of specified symbols and relevant parameters.

a)  Basic symbol, obtained by any processing method；

b)  Obtained by removing materials；

Ra-- The arithmetic mean of the absolute value of the contour offset within the sampling length L.

Ry-- The distance between the contour peak line and the contour valley bottom line within the sampling length L.

Generally, if Ra/Rz/Ry is not marked in the symbol, it defaults to Ra. 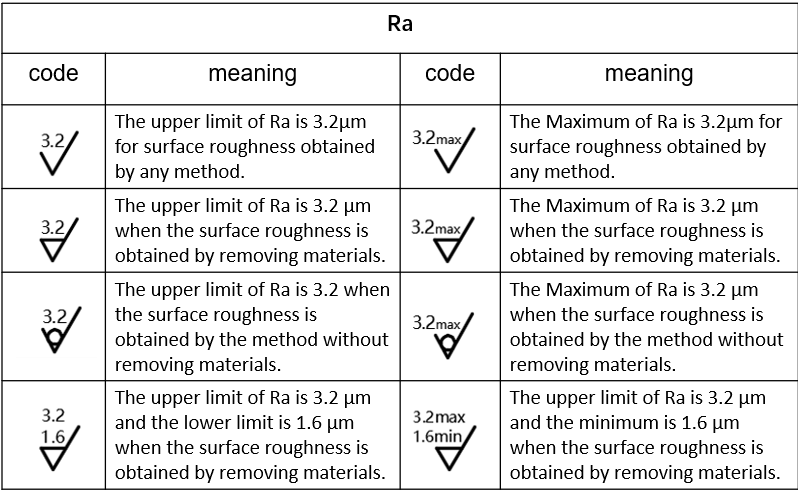 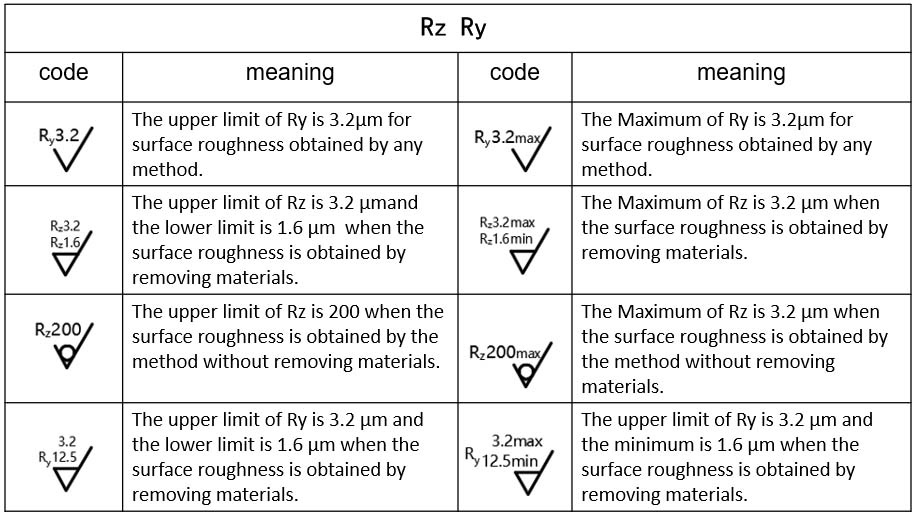 a. The tip is perpendicular to the machined surface, pointing from the outside of the material to the material surface, and the long stroke is always on the edge;

b. Digital dimension: the same as dimension;

c. All surfaces shall be marked only once; It can be marked on contour line (or extension line) and dimension limit；

2）Continuous surfaces are marked only once； 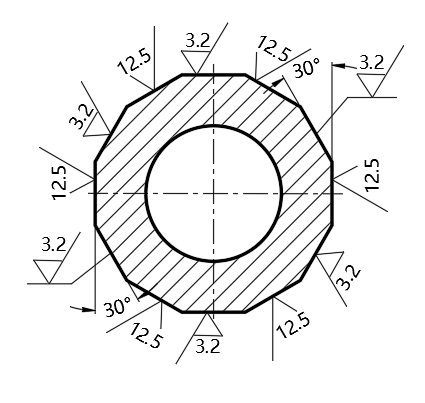