The RF microwave cable assembly is an important signal transmission component in the microwave system. A full understanding of the characteristics and parameters of the RF coaxial cable can help users to understand, select and employ product better. Therefore, Focusimple has set up a special collection of technical centers to provide you with reference in terms of materials, design, technology, and applications. In this article, we will focus on the factors that influence cable impedance and attenuation.

Figure 1 Impedance vs. Attenuation and Power

What are the factors that affect impedance?

Loss refers to the power lost during the signal transmission through the cable assembly. When the RF signal is transmitted in the cable assembly, part of the power is converted into heat and consumed, and part of the power leaks out through the outer conductor of the cable. The power difference between the two parts is called loss, or attenuation. For an RF system, the loss usually has strict indicators. After all, the heat consuming leads to critical loss in power, and 3dB attenuation mean 50% of power loss. 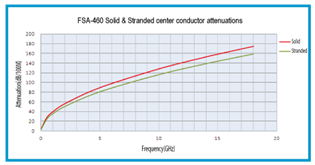 The outer conductor structure has more choices than the inner conductor structure. For flexible cables, there are usually SPC (Silver-plated copper) wire braiding, SPC ribbon braiding and SPC tape wrapping. SPC wire braiding is invented in the 1960s, which is the most traditional RG cable construction and has a very low cost. This structure has relatively low attenuation, good bending stability, and relatively stable high temperature characteristics; while the silver-plated copper tape wrapping is a structure invented in the 1980s. It is characterized by ultra-low loss and excellent mechanical phase, but it is also the structure with the highest cost, and the production process are also relatively strict.

The loss of SPC tape wrapping is about 20% better than that of SPC ribbon braiding, as shown in Figure 4. 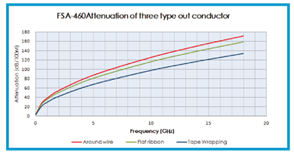 Common Dielectric are: solid PTFE, extruded foamed PTFE, and low-density PTFE. According to different material densities, low-density PTFE is classified as 76% and 83% VoP. Replacing the traditional semi-rigid 141 cable with solid PTFE into a cable with low-density PTFE will reduce the loss by about 30% under the same outer diameter. For the comparison of the 76% VoP and the 83% VoP, there is almost no significant difference in terms of attenuation (size decreases while VoP increases). Taking Focusimple’s semi-rigid FSD-141 cable as an example, Figure 5 details the effects of three different dielectric on cable loss. 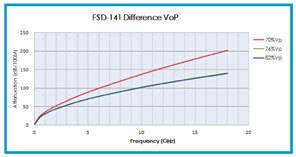 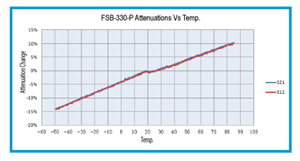 It should be noted that the slope of the attenuation curve of each cable structure is slightly different. If necessary, please contact Focusimple to obtain more comprehensive data of the corresponding product.